But Rosen realized the growing pains of building restaurants to scale.

Now, those details are in the hands of Savory. The $90 million growth fund, created earlier this year, announced plans Tuesday to invest in the six-unit Crack Shack. Over the next four to five years, Savory plans to expand the Southern California-based brand to up to 50 units in five to seven new markets including the Midwest.

Next year, the brand is expected to open about three to five new units. Those locations will be revealed at a later date, said  Andrew Smith, managing director of Savory, a new division of Salt Lake City-based growth fund Mercato Partners.

Smith said he was impressed with Crack Shack’s resiliency during the COVID-19 pandemic. He also took note of the brand’s fan base, which remained loyal during the crisis.

“What you’re always looking for is a brand that has a cult following,” said Smith, an industry veteran who has created food and beverage brands that have generated about a billion dollars in sales at 170 locations across the country.

Savory is focused on growing upscale fast-casual brands. But unlike other private equity firms, Savory doesn’t plan to invest and walk away or install new leadership.

That made a huge difference for Rosen, who initially partnered with celebrity chef Richard Blais when opening the first Crack Shack in 2015 next to their fine dining collaboration Juniper & Ivy. 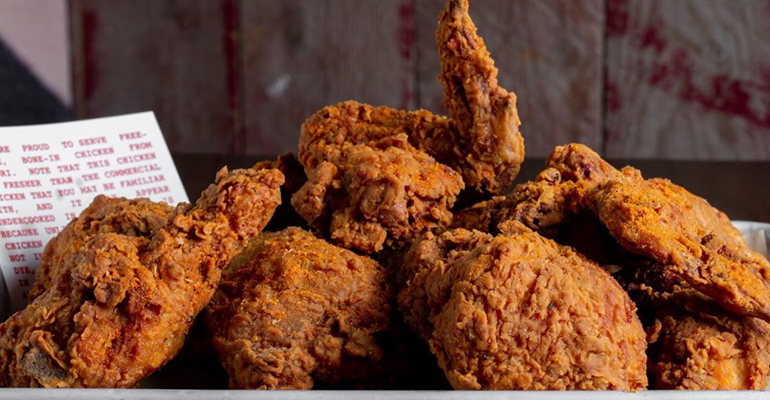 After being named a Nation’s Restaurant News Hot Concept in 2019, Rosen said Crack Shack was approached by many investors.

But, most want to pour kerosine on a fire, he said.

“They say, ‘Hey, here’s money. Go do this,’” Rosen told NRN. “And, you know, while we’re pretty proud of our management team, it’s pretty clear that our core competency is front of the house operations and food.”

That was also clear to Savory.

Before the pandemic took hold of the nation, Smith had been looking at many brands. Some fell off their radar immediately because they were not well capitalized or ill-prepared for the catastrophic impacts of the pandemic.

That was not the case for the six-unit Crack Shack, which pivoted quickly to delivery, carryout and special meal offerings during the pandemic.

The counter-service brand features bone-in fried chicken and fried chicken biscuit sandwiches made with Jidori chicken. The menu of sandwiches, salads and appetizers such as deviled eggs is prepared with organic produce and eggs. The concept also features cocktails and lively indoor and outdoor spaces with communal tables and games.

“The Crack Shack is one of the most intriguing brands to come out of the fast-casual mold, and truly brings together delicious and forward-thinking food in a family-friendly environment that you want to return to again and again,“ Smith said in a statement released Tuesday. “We’re thrilled to partner with Michael and his team to continue expansion and bring these unique flavors to hungry people across the country.”

Still, Smith and Rosen said the restaurant landscape has forever changed due to the pandemic.

And, Crack Shack must change along with it.

New restaurants going forward will have a smaller dining room footprint, but will also lean-in on outdoor seating. Most stores will go from an average seating of 120 to about 80, Smith said.

The change acknowledges the acceleration of off-premise ordering amid COVID-19. But, that doesn’t mean the brand is giving up on the social aspect of its dining rooms.

“We’re still going to lean into the in-dining experience and I think that that’s going to come back strong,” Smith said.

The chain’s six locations are in the greater San Diego area (Little Italy and Encinitas), Costa Mesa, Los Angeles, Pasadena and Las Vegas. Blais is no longer associated with the concept.

The community is talking.